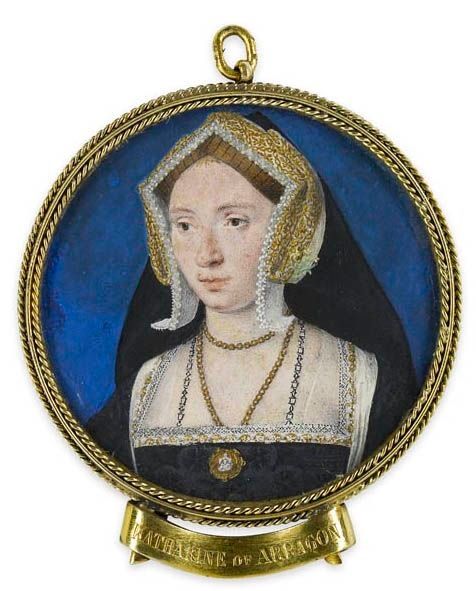 Now, many people flat out refuse to accept that this miniature is Anne Boleyn. I think rather that the artist has a talent for making his objects look plain and dowdy. 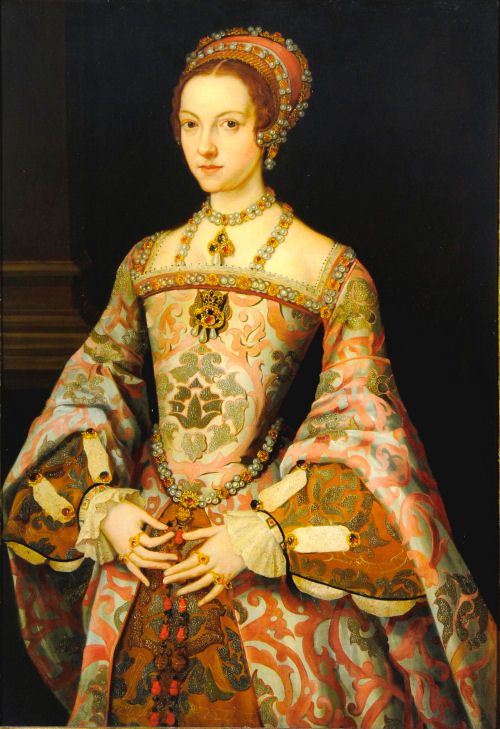 The Melton Constable or Hastings portrait of Queen Katherine Parr 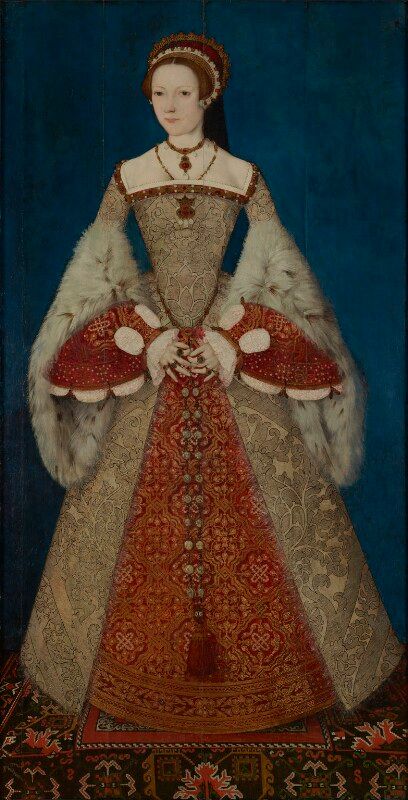 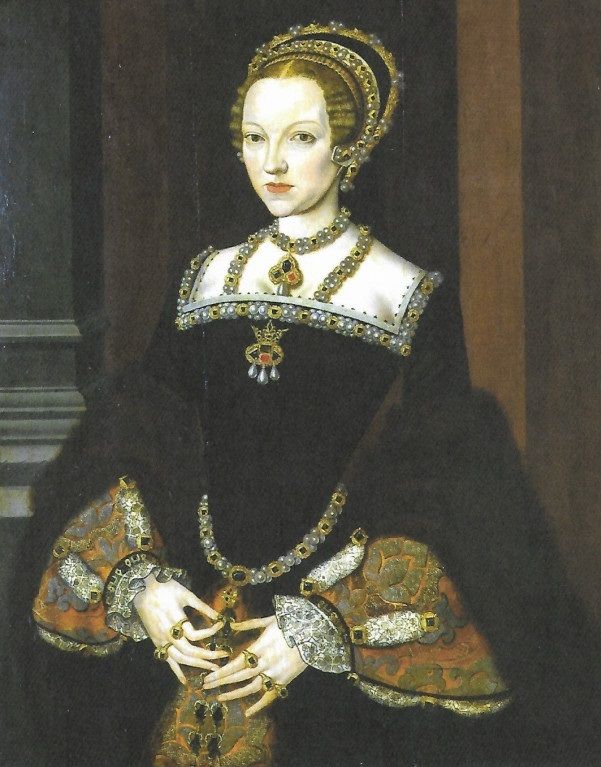 The Jersey Portrait of Katherine Parr

The above three paintings of Katherine Parr show an attractive, stylish woman. 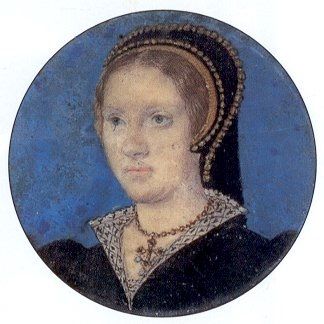 The above miniature of Katherine Parr shows neither.

I will confess to having had the same relationship to it as many people have to the Anne Boleyn miniature – I have simply refused to believe that it is of Katherine Parr. I have since amended that belief, however, since starting this research and I hope that others will do the same if they agree with my theory and put aside their instinctive dislike for the Buccleuch miniature as a representation of Anne Boleyn. 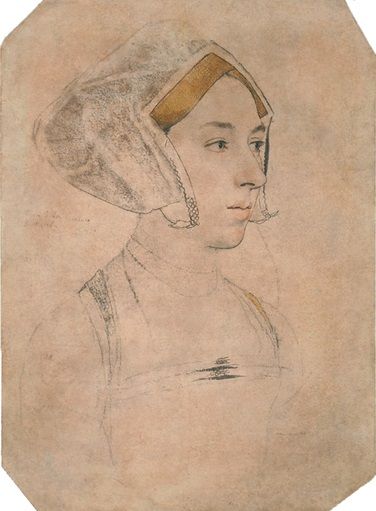 Portrait of Anne Boleyn (formerly thought to be)

Portrait of a lady, formerly thought to be Anne Boleyn, head and shoulders of a woman turned to right and looking to right, wearing a head-dress, necklace and bodice with a square neckline. Black chalk, partly stumped, and red chalk, with brush drawing in black ink, and with yellow wash; on pale pink prepared paper; corners cut diagonally.

Inscriptions Inscription Content: Inscribed in a seventeenth-century hand in brown ink, to the left of the sitter, “Anna Bullen de collata / Fuit Londini 19 May 1536”.

Curator's comments Although imperfectly preserved, this drawing is of high quality and equal to the best of the portrait drawings by Holbein in the Royal Collection at Windsor Castle. It was undoubtedly executed during the artist's second stay in England, when he had abandoned the practice of drawing portraits in coloured chalks on unprimed paper on a relatively large scale in favour of working on paper prepared with a flesh colour, on a smaller scale.

The identification of the sitter as queen Anne Boleyn is however, not correct. It can be traced no earlier than 1649, the date of the etching made by Wenceslaus Hollar after the present sheet, when it was in the collection of the Earl of Arundel (New Hollstein 978; see BM O,7.42 ). The print is inscribed "ANNA BVLLEN REGINA ANGLIÆ / HENRICI VIIui Vxor 2da Elizabeth Regine / Mater, fuit decollata, Londini 19 May Ao 1536", but it is not clear whether the inscription was taken from this drawing or vice versa. Many subsequent painted and engraved representations of Anne Boleyn were based on Hollar's print. Contemporary portraits of the queen are scarce. Rowlands and Starkey have presented a strong argument to support the identification of Holbein's drawing of c.1532-6 inscribed in a later hand 'Anna Bollein Queen' in the Royal Collection, although this has not been universally accepted (see 'Henry VIII: Man and Monarch' exhibition catalogue edited by S.Doran, London, British Library, 2009, no.3). Her coronation medal of 1533 has survived in a single lead impression, which is very worn (British Museum, Department of Coins and Medals, inv. no. M 9010). Of the mid-sixteenth century representations of her, the most reliable must be the tiny miniature set into a ring of about 1575 which belonged to her daughter, queen Elizabeth I (The Chequers Trust; see 'Elizabeth' exhibition catalogue edited by Susan Doran, London, The National Maritime Museum, 2003, no.7). This likeness comes from the same source as the painting in the National Portrait Gallery (inv. no. 668) and is seen in later copies such as the one in Ripon Cathedral (see 'Henry VIII: Man and Monarch' exhibition catalogue edited by S.Doran, London, British Library, 2009, no.105).

There is a copy of the present drawing in the Ashmolean Museum, Oxford, drawn in black lead on vellum. This was formerly ascribed to George Vertue, but has been attributed by Brown to Jonathan Richardson, senior (1665-1745), a former owner of the present drawing. It is accompanied by a curious account written by the younger Richardson of how his father lent the original, which was never returned, to the then Earl of Bradford.

Acquisition notes Probably from the 'Great Booke' (first recorded in the 1590 inventory of Lord Lumley), which contained portrait drawings by Holbein, chiefly of members of Henry VIII's court, the majority of which are now in the Royal Library, Windsor Castle; from which it was removed towards the end of the seventeenth century.» Portrait of a lady, formerly thought to be Anne Boleyn – The British Museum

My Thoughts on the Bradford Holbein Drawing of Anne Boleyn

To placate all the Anne Boleyn fans I have undoubtedly annoyed by my championship of the Buccleuch miniature as a genuine painting of Anne, I hasten to add that I am in no such hurry to write off the Bradford sketch as a representation of Anne as seems to be the fashion these days.

The earliest reference we have to these sketches by Holbein, as far as I know, is in the Lumley Inventory:

A great booke of Pictures doone by Haunce Holbyn of certyne Lordes, Ladyes, gentlemen and gentlewomen in King Henry the 8: his tyme, their names subscribed by Sr John Cheke Secretary to King Edward the 6 wch booke was King Edward the 6.

It clearly says that their names are subscribed by Sir John Cheke.

This means that there must have been some sort of central list that one crossreferenced the drawings with. It therefore logically follows that someone else, employing this list, must have written Sir John Cheke’s identifications on the drawings.

This was probably done when a drawing was removed from the book mentioned in the Lumley Inventory, so that Sir John Cheke’s identification would not be lost or confused.

This fits with what we know of the Bradford Holbein Drawing’s provenance:

«There is a copy of the present drawing in the Ashmolean Museum, Oxford, drawn in black lead on vellum. This was formerly ascribed to George Vertue, but has been attributed by Brown to Jonathan Richardson, senior (1665-1745), a former owner of the present drawing. It is accompanied by a curious account written by the younger Richardson of how his father lent the original, which was never returned, to the then Earl of Bradford.»

It was not in a book then, and it seems perfectly possibly that it was removed from the book mentioned in the Lumley Inventory, as the British Museum writes, «towards the end of the seventeenth century.»

The fact that the handwriting is then seventeenth century is of course par for the course for a copying of Sir John Cheke’s identification at this time.

The accuracy of his identifications seems to be dependent upon how well he knew the subject. His identifications of the drawings of the female members of Sir Thomas More’s family are all wrong,[1] for instance, and their presence at court would have been scarce since about 1532/1533, and certainly after Sir Thomas More’s execution in 1535. Sir John Cheke was appointed tutor to the future King Edward VI of England on the 10th of June 1544, as a supplement to his tutor Dr. Richard Cox, to teach him “of toungues, of the scripture, of philosophie and all liberal sciences” (as the Prince wrote in his Journal), and commenced his duties at Hampton Court soon afterwards. The More family's presence at court would therefore not have overlapped with Sir John Cheke’s presence at court, and it would make sense that he did not know them well.

People we know, from corroborating inscribed paintings, that he correctly identified were George Brooke, 9th Baron Cobham (c.1497 – 29 September 1558) and Sir George Carew (c.1504 – 19 July 1545). These were people who would have been contemporaries at court along with Sir John Cheke, and thus well-known to him.

Actually, it appears that he knew her pretty well. Or at least a little. Through the mediation of Matthew Parker, Cheke obtained the support of Anne Boleyn for his student William Bill to continue his studies.

Sir John Cheke also correctly identified a few people who had been at court after 1532 while Anne Boleyn was Queen, but who were no longer there when he himself was Edward's tutor. Nicholas Bourbon had been a part of Anne Boleyn's circle, he benefited from her protection while in England. Margaret Wotton, Marchioness of Dorset stood as one of the two godmothers of Princess Elizabeth, daughter of Henry VIII and Anne Boleyn, who would later rule as Queen Elizabeth I of England. Three months earlier, on 1 June, Margaret had ridden in Anne Boleyn's coronation procession from the Tower of London to Westminster Abbey. The drawings of Nicholas Bourbon (1503 or 1505 – after 1550; he returned to France in 1536) and Margaret Wotton, Marchioness of Dorset (1487 – after 1541/probably bef. 19 April 1544) both have corroborating images confirming Sir John Cheke's identifications.

I can therefore see no particular reason to doubt that the Bradford Holbein Drawing actually is Anne Boleyn. 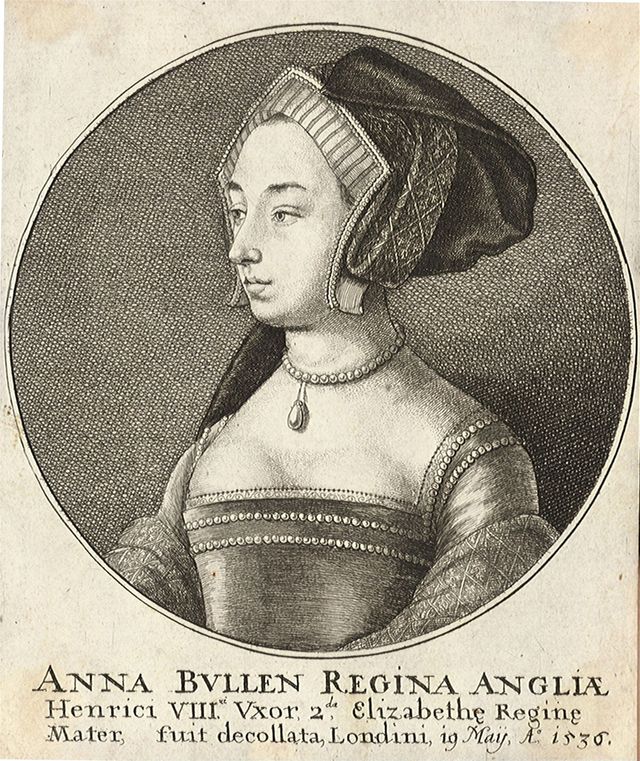 After Hans Holbein the Younger 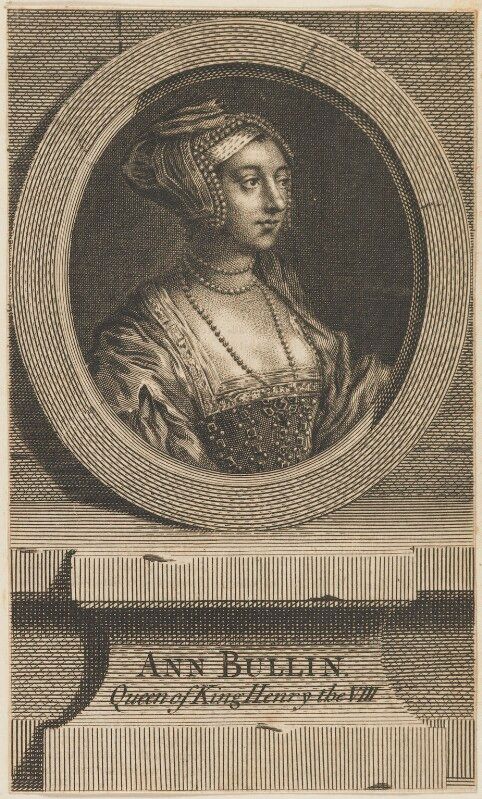 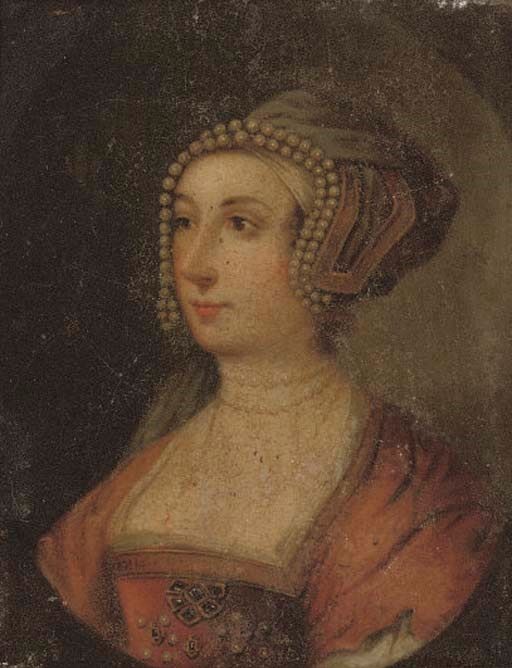 Sold at Christie's as lot 969. Portrait of a lady from the Tudor court, bust-length, in a red dress and pearl adorned head-dress, in a feigned oval. English School, 18th Century.

Clearly a depiction of Anne Boleyn. 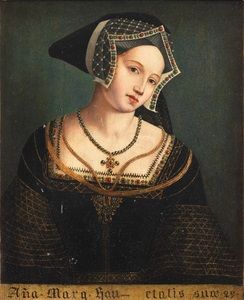 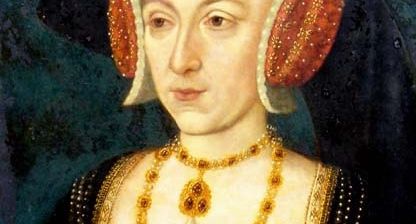 They do look as if they could be the same woman to me. 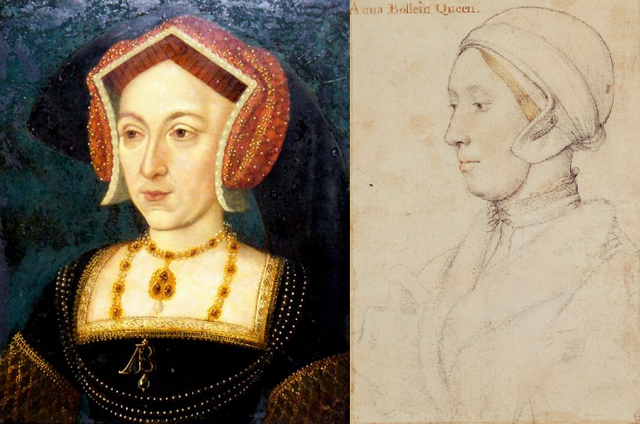 [1] Anne Cresacre, aged 15, was the ward of Thomas More, later the wife of his son John More the Younger. – Drawing left unidentified by Sir John Cheke.

Elizabeth Dauncey, aged 21, was the daughter of Thomas More. In 1525, she married William Dauncey, son of Sir John Dauncey, Privy Councillor and Knight of the Body to Henry VIII. – Drawing identified as 'The Lady Barkley' by Sir John Cheke.

Margaret Clement (née Giggs), aged 19, was the foster daughter of Thomas More. In 1526, she married John Clement, tutor to the More children and future President of the Royal College of Physicians. – Drawing identified as 'Mother Iak' by Sir John Cheke.

Cicely Heron, aged 20, was the daughter of Thomas More. In 1525, she married Giles Heron, a ward of More. – Drawing left unidentified by Sir John Cheke.

All of them are positively identified in the Study for the Family Portrait of Thomas More by Hans Holbein the Younger.