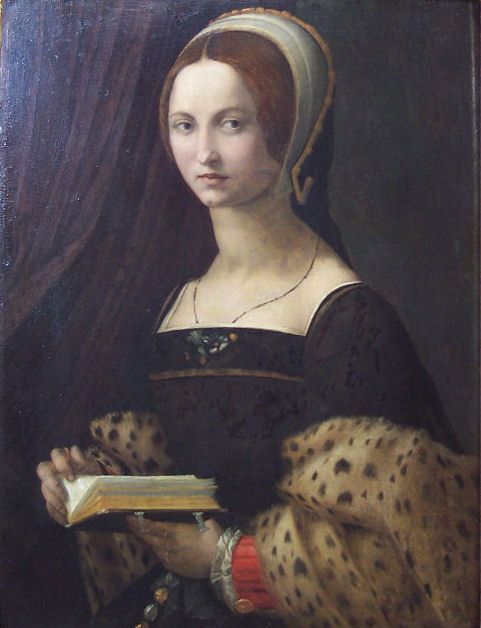 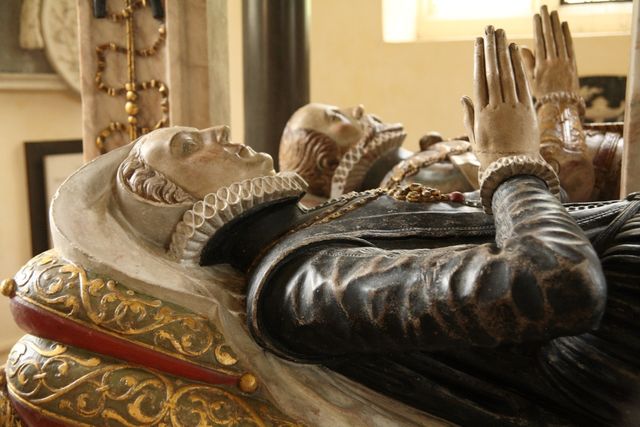 Close-up view of the Knollys Monument. The figure nearest the camera is Lady Catherine Knollys, with her husband Sir Francis Knollys at her side. She was a Lady-in-waiting to Queen Elizabeth I, to whom she was first cousin (by reason of their mothers, Mary and Anne Boleyn, being sisters).

My original theory here was that the lady in the Somerley Portrait was Catherine Carey, the daughter of Mary Boleyn and the niece of Anne Boleyn.

This theory was primarily based on the likeness between the lady in the Somerley Portrait, and the lady in the portrait of Catherine Carey, Lady Knollys in the Yale Center for British Art 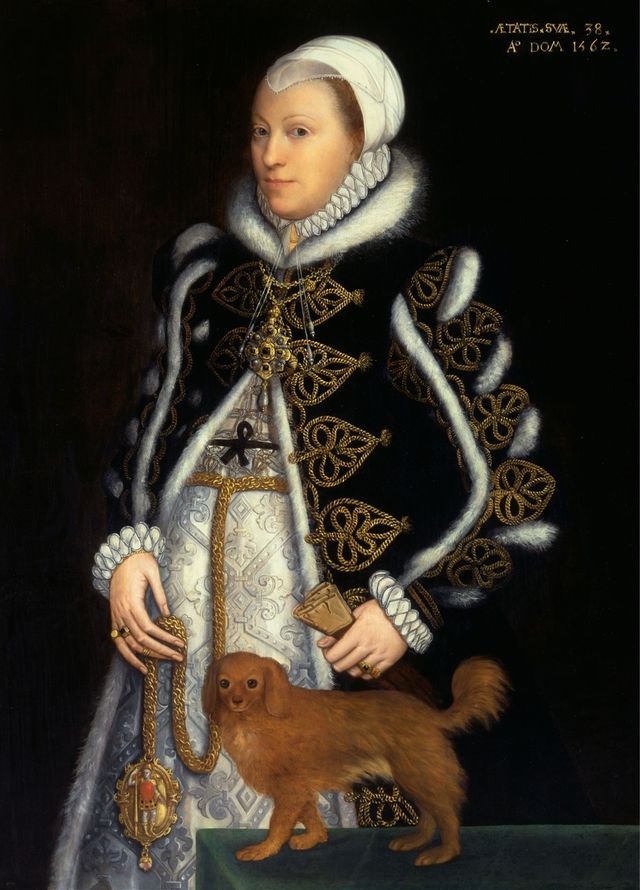 Trying to date the portrait based on the French Hood, it bears the greatest resemblance to one worn by Anne Boleyn in her perhaps most famous portrait:

The National Portrait Gallery dates this painting 1533–1536, Anne’s tenure as Queen. It could, however, date from earlier.

The French Hood of the lady in the Somerley Portrait is nearly identical to the French hood of the sitter in a portrait of an unknown woman, formerly known as Margaret Tudor: 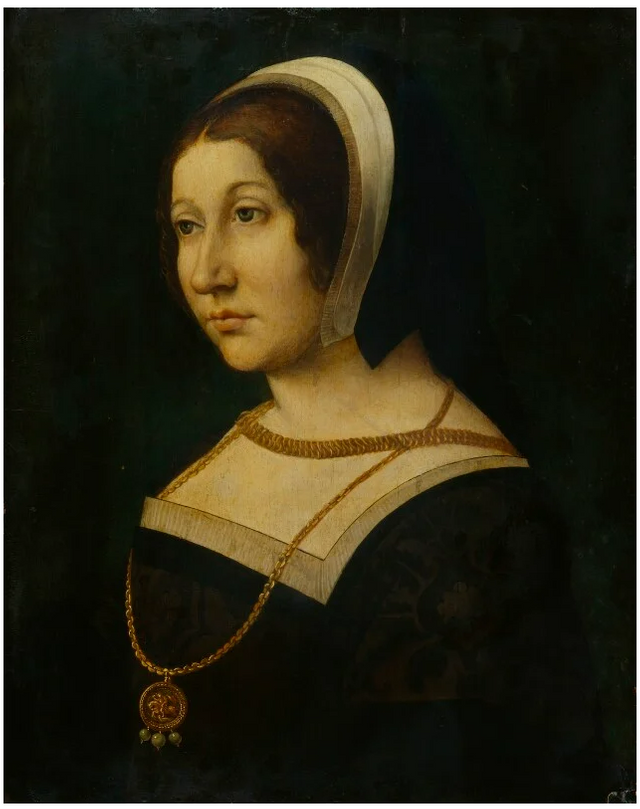 Catherine Carey married Sir Francis Knollys on the 26th of April 1540. My idea was that the Somerley Portrait was in fact her wedding portrait.

Katherine Howard was fond of her Boleyn-Howard relations (she referred to the little disgraced not-Princess Elizabeth as 'kinswoman').

Katherine Howard probably had her own portrait done during this period, and I could imagine her thinking it would be great fun if she and her cousin had theirs painted at the same time.

Katherine Howard had the King’s interest and the influence all his women had on him until they became his queen, and Catherine Carey was rumoured to be his daughter. I can imagine him reaching for the royal billfold quite easily.

I can't imagine Henry VIII being particularly embarrassed by the fact that public opinion had named him Catherine Carey’s true father. The easiest way to suppress any rumours or make people forget the entire affair (pun intended) would simply have been not to invite Catherine Carey to court and instating her as maid of honour to two of his wives. Instead, I would think that it was a point of particular pride for him that he had 'had' two sisters.

It is still a popular theme in certain genres of entertainment.

If not necessarily to the general populace, for whom Henry VIII undoubtedly wished to still be their virtuous prince and the defender of the faith, then certainly to the court, where his inner circle (Charles Brandon main amongst them) probably knew to appreciate that sort of thing.

Or rather, he wanted to be the virtuous prince and the Defender of the Faith and one helluvaguy at the same time.

"The small number of art historians who have previously studied this picture largely agree that the work displays a strong Italian influence, both in subject composition and in the linear execution. In particular, the positioning of the sitter appears to have been inspired by the works of Raphael, so that attribution for this painting has typically centered on his students and followers. The work was first attributed to Luca Penni [...] at least one Italian surnamed "Penn" had indeed been recorded at the court of Henry VIII. A manuscript of "The King’s Payments" now in the British Library reveals payments in March 1540 totaling 12l. 10s. made to "Anth. Toto and Bartill Penn, painters." Those two men are usually identified as Antonio Toto del Nunziata (d.1554) and Bartolomeo Penni. Toto worked regularly for the Crown and court from about 1530 until the early 1550s, though few surviving works are today attributed to him. Bartolomeo Penni has frequently been conflated with Luca Penni, yet modern scholarship reveals that the two were distinct individuals. Other than Antonio Toto and Bartolomeo Penni, only a mere handful of Italian artists are known to have worked in England in the 1540s and 1550s, and no "Luca Penni" is found among them." (A Queen of a New Invention by J. Stephan Edwards, p. 76).

"The limited modern scholarship on Luca Penni indicates that he was born in Rome in about 1500 and emigrated to France in about 1530, worked at Fontainebleau from 1538, and finally settled in Paris in 1550. He died in Paris in 1556/7. No documentation survives to indicate that Luca Penni was ever in England." (A Queen of a New Invention by J. Stephan Edwards, p. 78).

"The costume seen here is decidedly non-Italian." (A Queen of a New Invention by J. Stephan Edwards, p. 77).

King Henry VIII made a payment of 12l. 10s. to Italian painters Antonio Toto del Nunziata and Bartolomeo Penni who worked for court and Crown in March 1540, one month prior to Catherine Carey’s marriage, precisely when one could expect that a wedding portrait would have been painted. 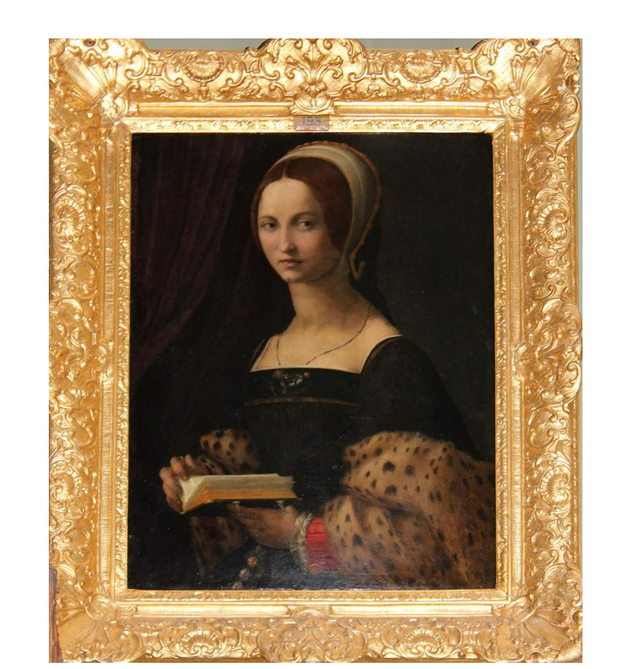 Collection of the Earl of Normanton, Somerley House, Hampshire

For J. Stephan Edwards's assessment of the The Somerley Portrait, see p. 74-78 of A Queen of a New Invention.