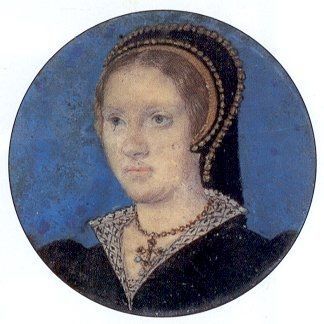 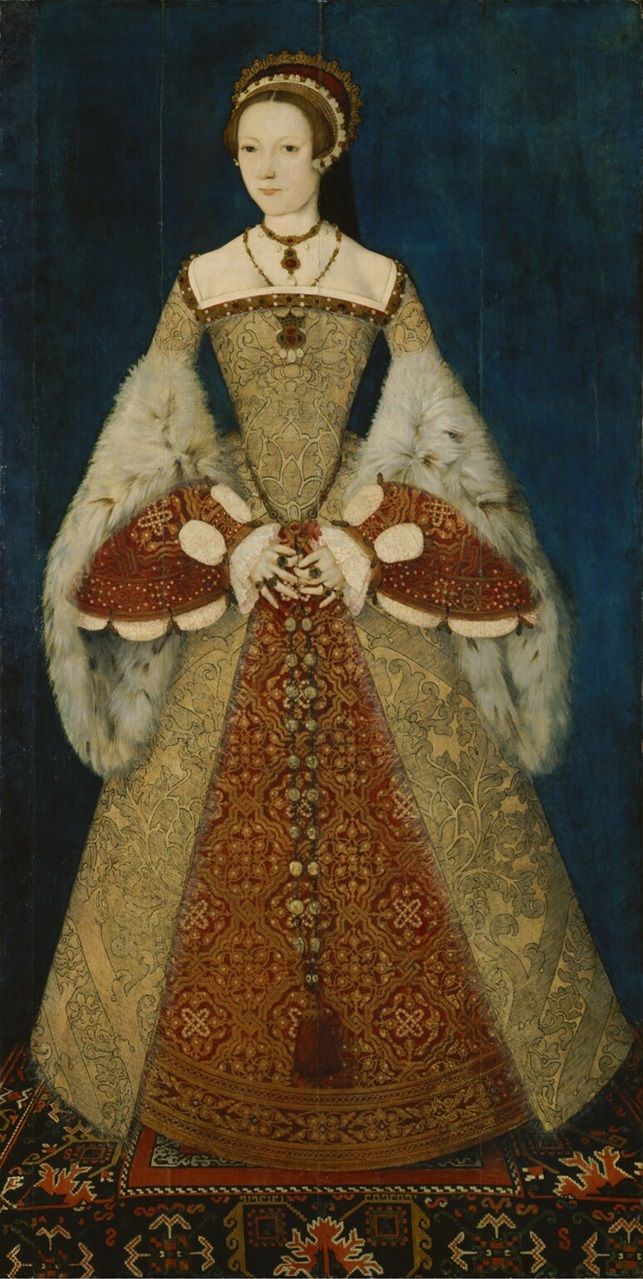 Katherine Parr – Owned by the Earl of Denbigh in 1774 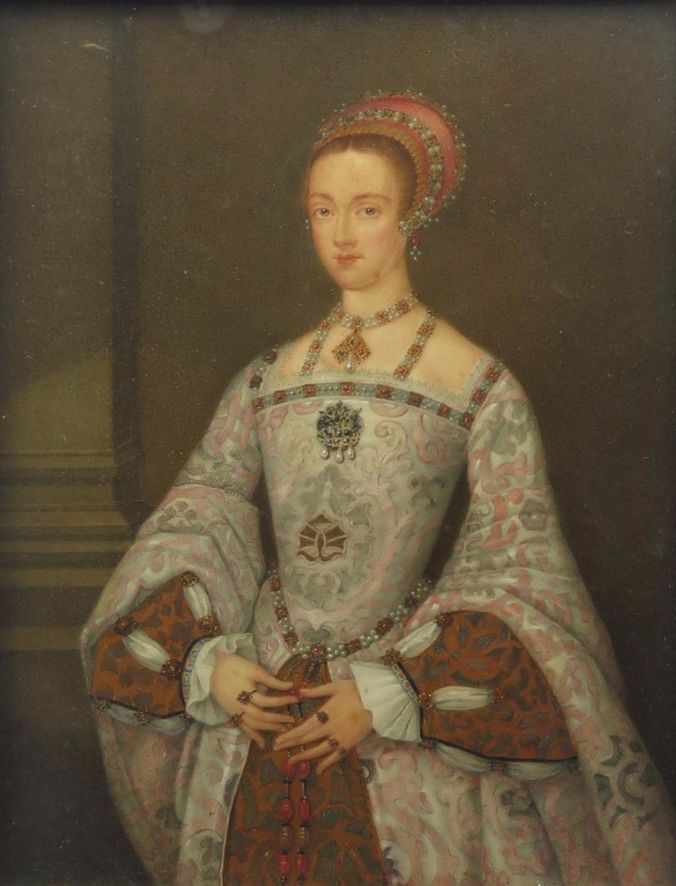 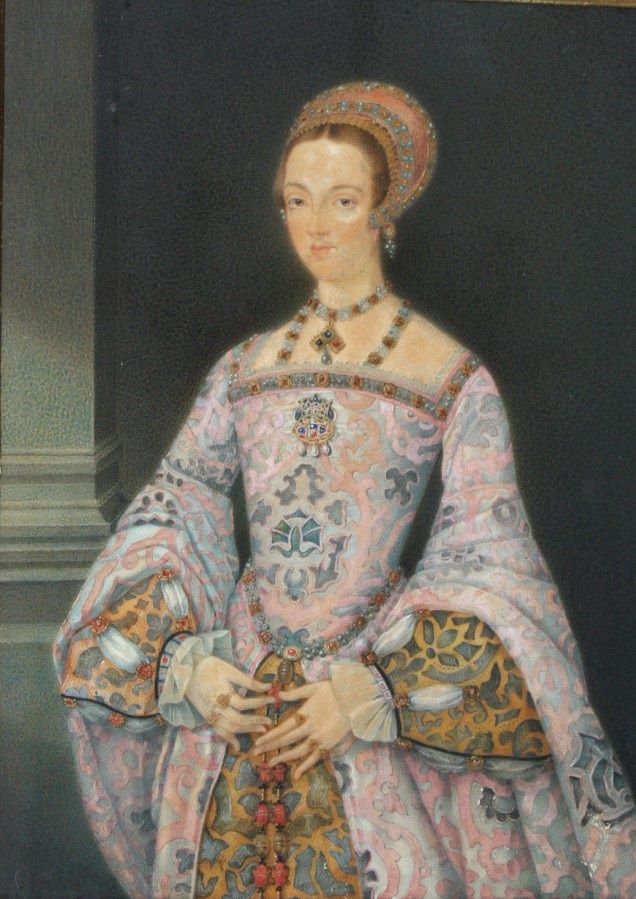 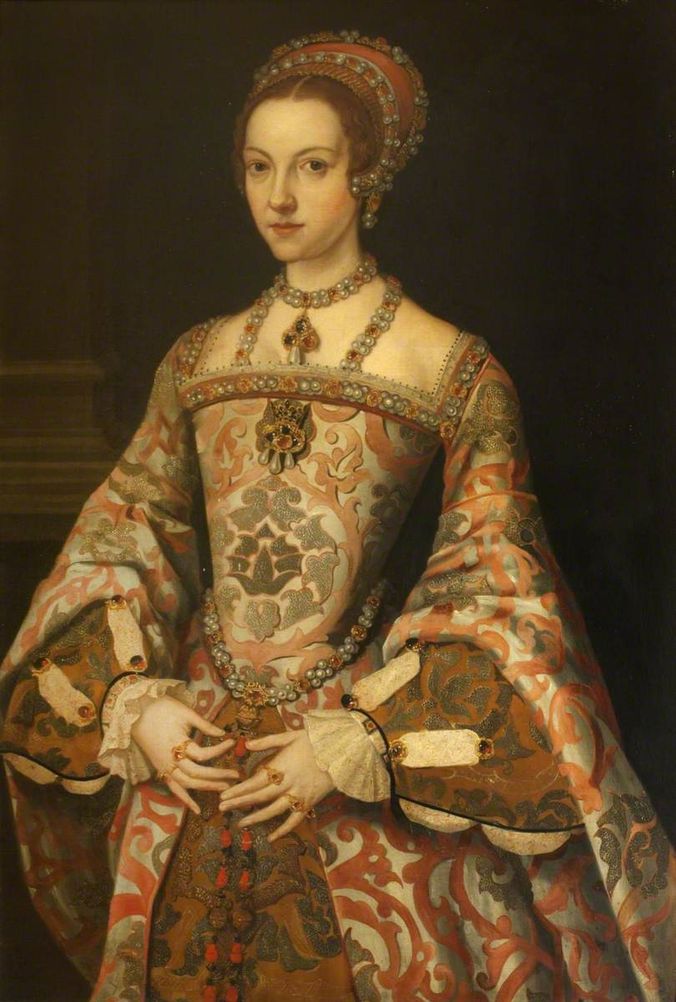 The Hastings or Melton Constable Portrait

According to J. Stephan Edwards, it is in oils, and is presently on canvas. The painting was reportedly originally on wood panel, but was supposedly transferred to a canvas backing in 1893. The transfer was not easily accomplished, so that considerable restoration was required. He references Christopher Hussey, ‘Melton Constable Hall’, Country Life 64, nos. 1652 and 1653 (15 and 22 September 1928), 364–370 and 402–409.

This portrait was owned by the Astleys at Hillmorton by 1770. John Astley's first wife was Katherine Champernowne, Elizabeth I's beloved Kat Ashley.

As the step-mother and governess of Elizabeth I Tudor, the two women probably knew each other. The portrait of Katherine Parr was therefore probably a gift directly from Katherine Parr to Kat Ashley, the other mother figure in her step-daughter's life, in the same way the Glendon Hall or NPG 4451 is now thought to have been a direct gift from Queen Katherine Parr to her cousin Maud. Glendon Hall once belonged to sir Ralph Lane, who married Maud Parr, a cousin and lady-in-waiting to Katherine Parr.

The Astleys longstanding tradition that this portrait is Lady Jane Grey is probably because John Astley's second wife and the mother of his children was Margaret Lenton or Grey, Lady Jane Grey's first cousin. She was the illegitimate daughter of Lord Thomas Grey, who was executed together with his brother, Henry Grey, Duke of Suffolk, and niece, Lady Jane Grey, for having participated in Thomas Wyatt's rebellion in 1554, and the mother of Sir John Astley, whose 'children had all predeceased him, and his estates passed to his ‘cousin’ Jacob, Lord Astley, the royalist general,'[1] the ancestor of the Astleys who owned Hillmorton in 1770. John Astley's first marriage to Kat Ashley had been childless.

Margaret Lenton or Grey was probably the original owner of the Chawton Portrait of her other cousin Lady Katherine Grey, which can be traced back to the family of the widow of one of her direct descendants. 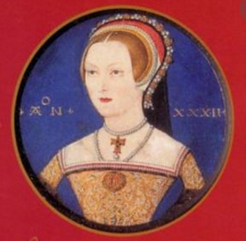 This miniature was previously in the Strawberry Hill Collection of Horace Walpole by at least 1774.

1774 Description: Within the cabinet of enamels and miniatures...Katharine Parr; by Holbein: a most scarce head, and exactly like the picture of her at the earl of Denbigh’s at Nuneham Padox, Warwickshire 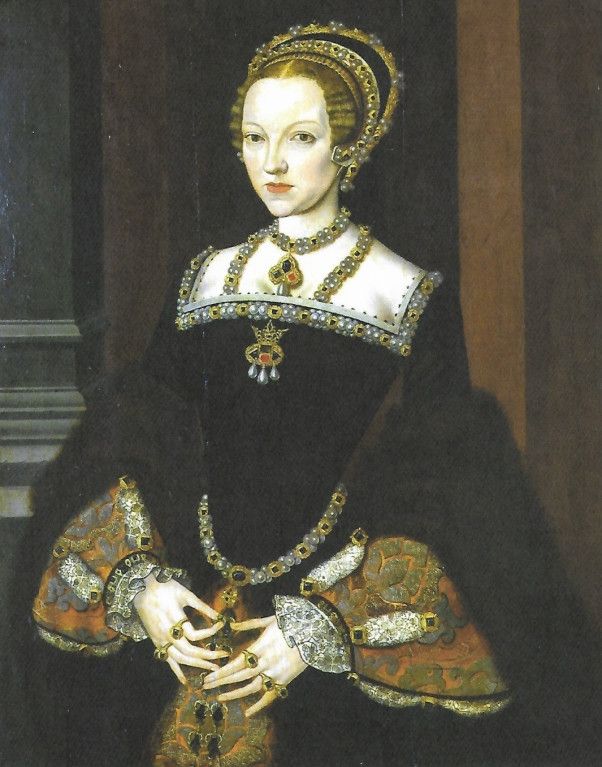 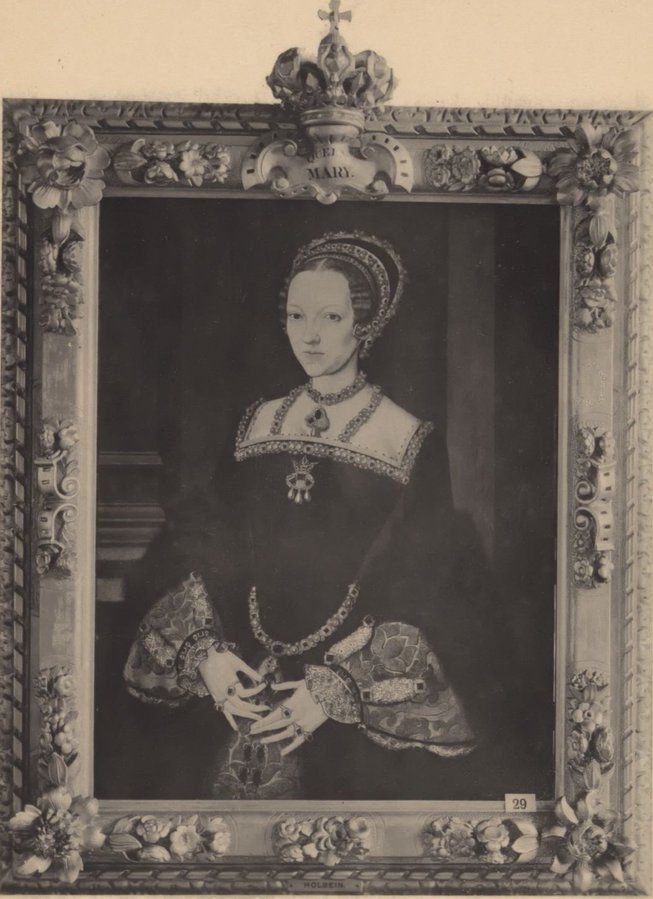 Beautiful early photo of the Jersey Portrait, once thought to depict Lady Jane Grey. The frame is magnificent and dates from when the portrait was in the Stowe House collection and thought to be a depiction of Mary Tudor by Hans Holbein. Lady Jane Grey Revisited on Twitter

290 Queen Mary, in a black dress, with richly ornamented sleeves – (Ditto) Ryman 70 7 0 The two preceding portraits were purchased, a few years since, at a sale at Prior's Bank, near Fulham. Stowe catalogue, priced and annotated: by Henry Rumsey Forster by Christie, Manson & Woods

For more about this portrait and others once found at Stowe see The Stowe House Portraits at Lady Jane Grey Revisited. 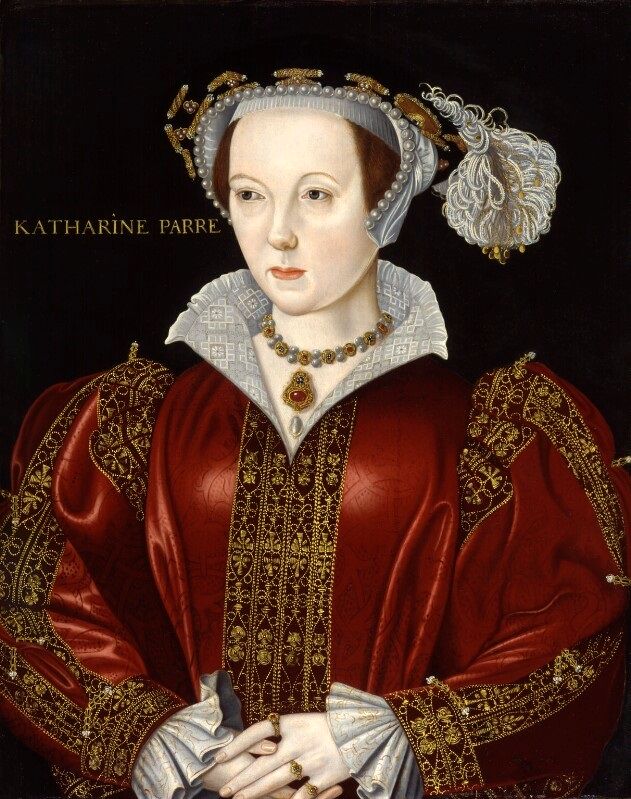 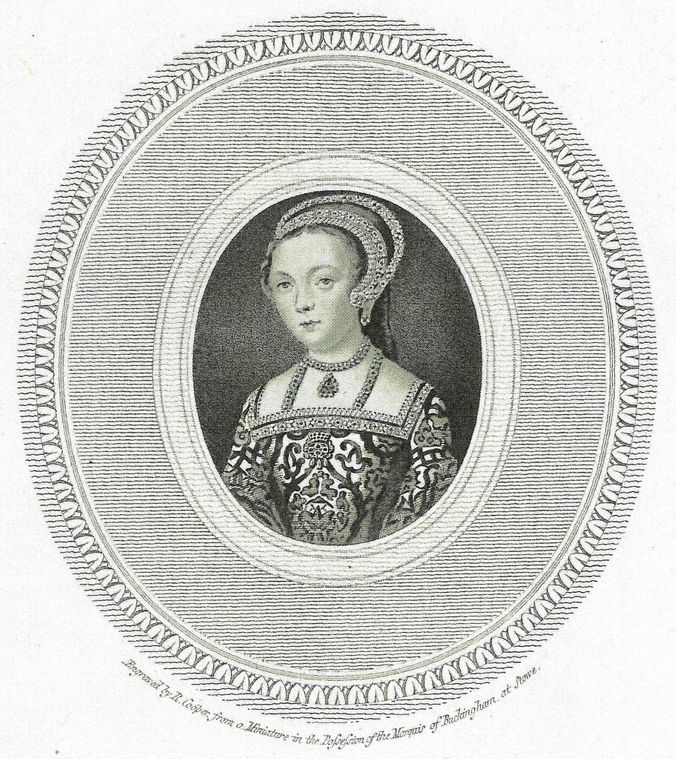 Due to the Van de Passe engraving in Herωologia Anglica (1620) called Lady Jane Grey, but based on a portrait of Katherine Parr of the Melton Constable or Hastings Portrait and the miniature at Stowe type, has

Engraving by Adrian van Derbyshire Werff (1659-1722), based on the Van da Passe engraving of Lady Jane Grey in Herωologia Anglica.

I present a couple of particularly beautiful examples of this tradition here. 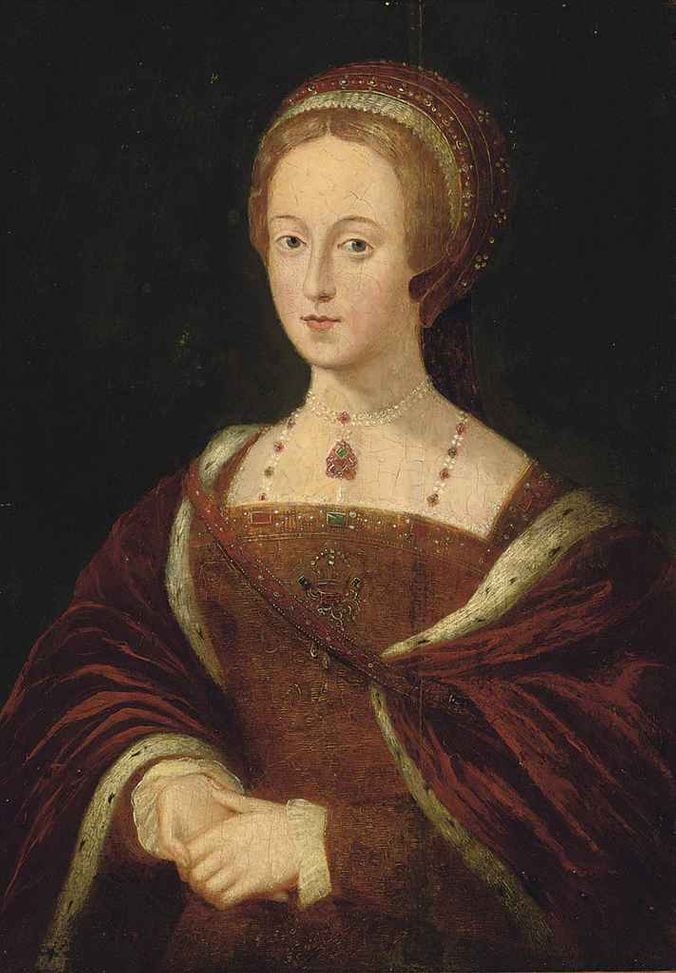 Portrait of a lady, half-length, in a jewel-encrusted dress and an ermine-trimmed red cape