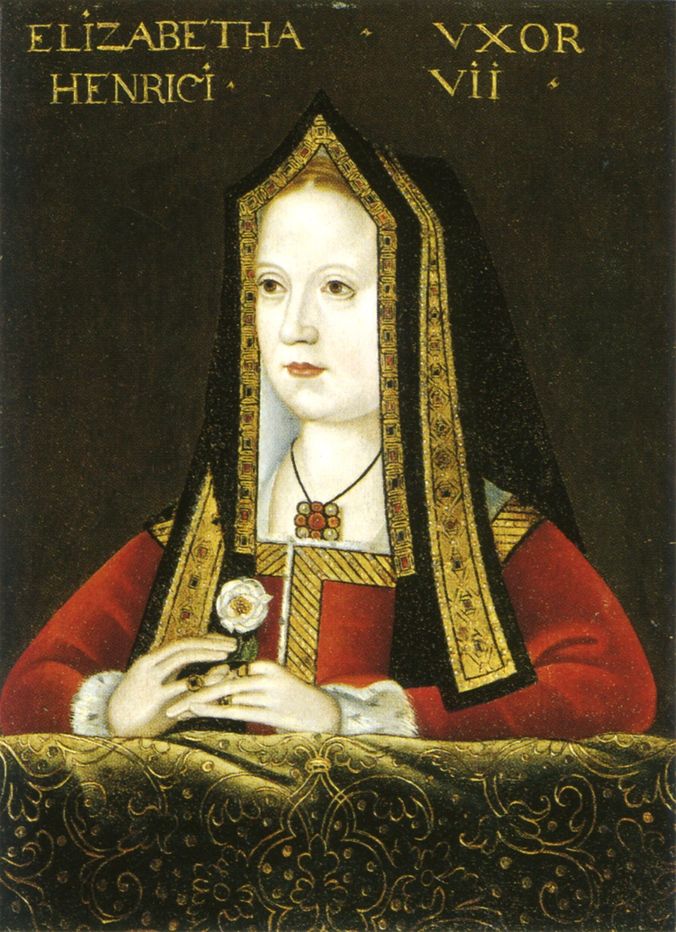 «The daughter of Edward IV, Elizabeth married Henry VII in 1486, an act which reconciled moderate Yorkist opposition to the Tudor dynasty. In this portrait, which was made a considerable time after her death, Elizabeth holds a white rose, the symbol of the House of York, while portraits of Henry from the same period frequently depict him holding the red rose of the House of Lancaster.» 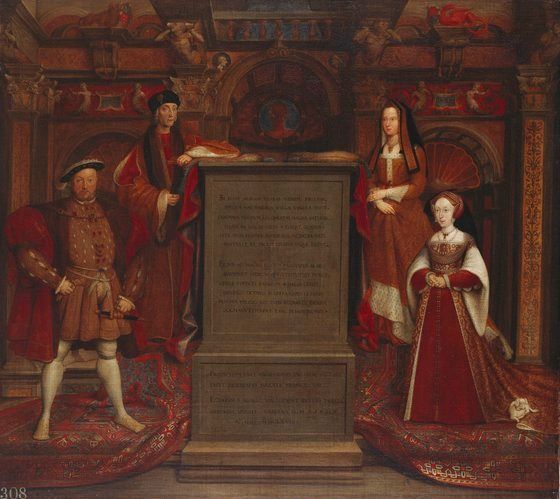 «This small painting was copied by the Flemish artist Remigius van Leemput for Charles II from the life-size mural on the wall of the Privy Chamber in Whitehall which was painted by Holbein for Henry VIII in 1537. The wall-painting was destroyed by the fire at Whitehall Palace on 4 January 1698 and this is the only complete record of the mural. Holbein's original preparatory cartoon for the left half of the composition is in the National Portrait Gallery.

The first part of the Latin inscription on the plinth in the centre of the composition translates: ‘If it pleases you to see the illustrious images of heroes, look on these: no picture ever bore greater. The great debate, competition and great question is whether father or son is the victor. For both, indeed, were supreme'.» 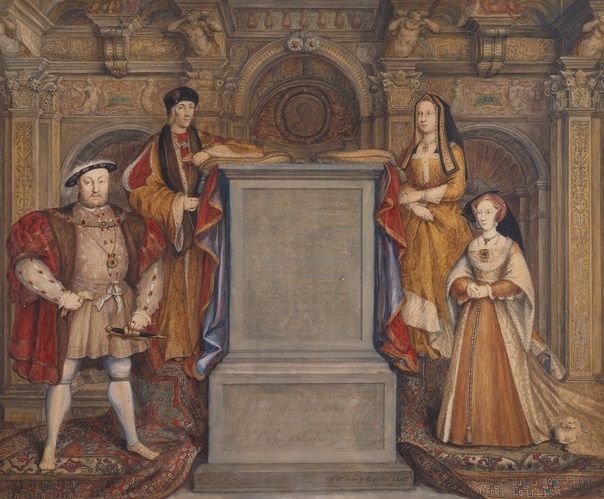 «The original wall painting was commissioned by Henry VIII from his court artist Hans Holbein the Younger in 1537. It was painted in his palace of Whitehall in central London. The Holbein painting was destroyed by a fire in Whitehall in 1698 but its appearance is recorded in an oil painting made by Remigius van Leemput for Charles II (also in the Royal Collection), and in this early eighteenth-century watercolour, a copy after van Leemput’s piece. One of Holbein’s cartoons for the mural, for the figure of Henry VIII, is in the National Portrait Gallery.» 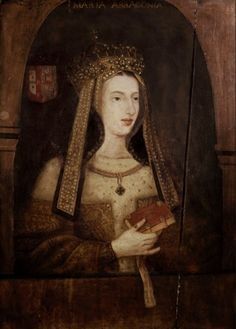 The painting is inscribed «Maria Arragonia».

The coat of arms in the top left of the painting can probably give us a conclusive answer as to which Maria of Aragon she is. 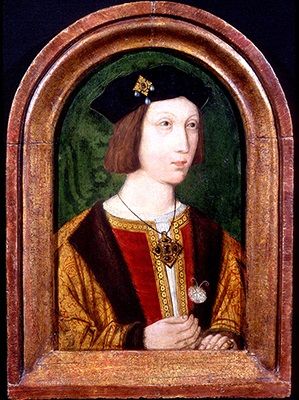 «It is difficult to exaggerate the rarity and the importance of this small royal portrait. When discovered it was described by Catherine MacLeod, curator of sixteenth and seventeenth century portraits at the National Portrait Gallery, as ‘the only surviving portrait of Arthur that could have been painted within his lifetime,’ which means that it is one of the earliest surviving easel portraits in British art.»

«From the sitter’s age it is apparent that this portrait was executed in the concluding stages of the marriage negotiations, and by costume may be dated to c.1500. The association with the Prince’s marriage is especially probable when one considers the flower that he is depicted holding. The white gillyflower traditionally connotes betrothal and purity, by reason of its colour, and kingship, by reason of the coronet-like shape of its flowers. The identification of this motif is confirmed by the description of this panel in a seventeenth century inventory of the Royal Collection, compiled between 1637 and 1640 by Abraham van der Doort, Keeper of the Royal Pictures to Charles I:A Whithall peece Item the i5th being Princ Arthure in his minorityeIn a black cap and goulden habbitt houlding in his right hand a white gillifloore in a reed pintit goulden frame» 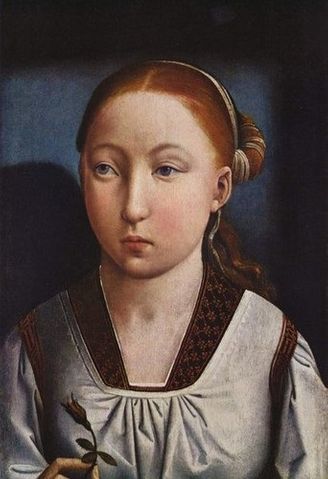 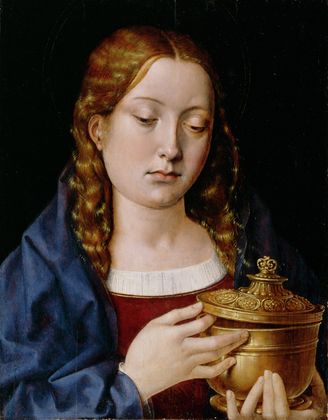 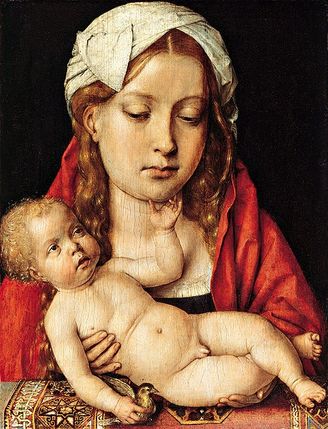 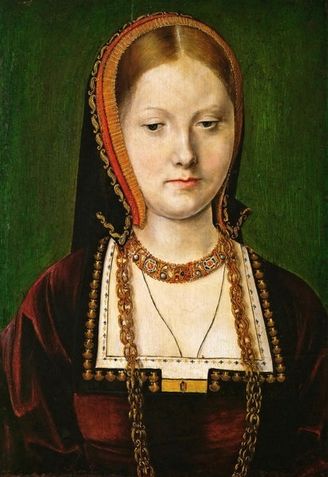 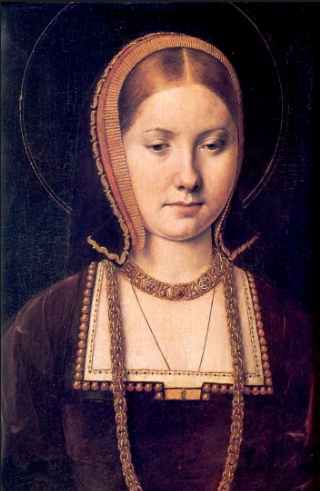 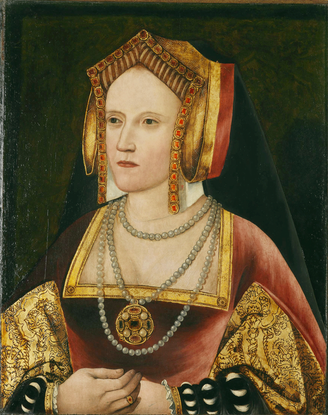 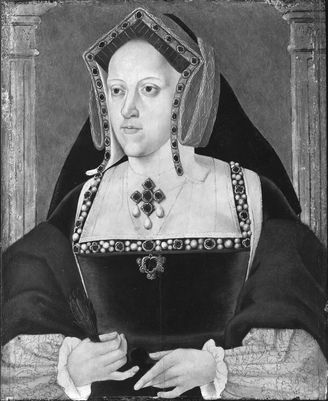 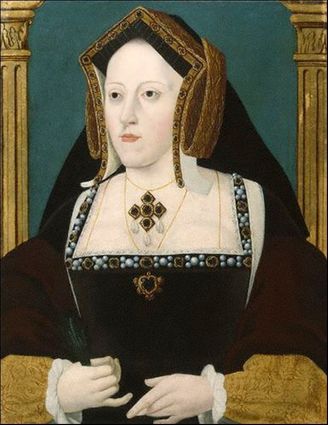 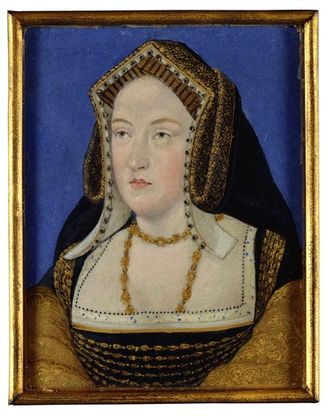 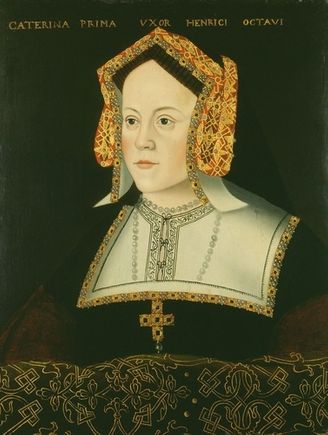 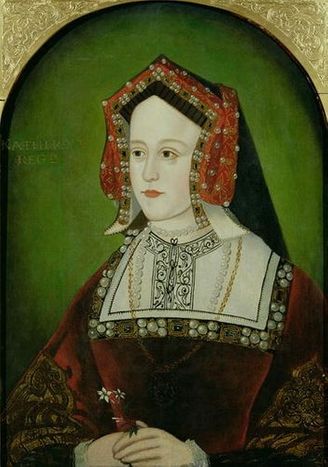 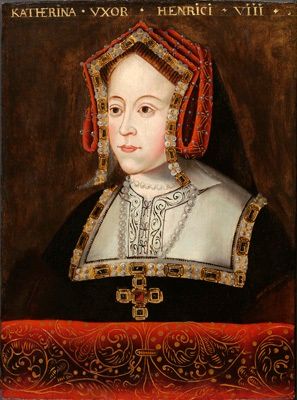 Portrait of an Infanta. Katherine of Aragon (?)

Portrait by Juan de Flandes thought to be of 11-year-old Katherine. She resembles her sister Joanna of Castile.

Katherine of Aragon as Mary Magdalene

Katherine of Aragon as the Virgin Mary

«This portrait of Katherine is a version of a widely-circulated likeness that depicts the queen circa 1530 (a similar version is in the collection of the Museum of Fine Arts in Boston). Technical analysis has revealed that this portrait is not contemporary with the sitter and instead dates from the early eighteenth century, demonstrating a market for Tudor portraits during this period. 'Prussian blue', a pigment invented between 1704 and 1710 and only commercially available on a wide scale from the 1720s, was found to be present in the paint used for the background, the jewel of Katherine's headdress and in the sprig of foliage that she holds in her hand.»

«Hollar must have copied her portrait from one of the miniatures of the queen attributed to Lucas Horenbout, such as the example now in the Buccleuch collection.»

«This is a version of a standard type of portrait of Katherine of Aragon which probably derives from an original portrait type associated with the artist Johannes Corvus (c. 1510-20). Other versions are in the National Portrait Gallery London, Merton College Oxford and at Petworth.»

«This small portrait of Henry VIII's first wife was presumably painted towards the end of Queen Eliabeth's reign to complete a set of Kings and Queens of England hanging in a patron's long gallery or library.»

«This bright and boldly painted image derives from the best known easel portrait of Katherine, that attributed to Jan Corvus, or Jan Rav (d. c.1544) now in the Museum of Fine Arts, Boston. This example, most probably painted in the 1560s (according to a dendrochronoligical analysis of the oak panel) would have formed part of a series of ‘corridor portraits’ in an important English house. In this case, given the inscription identifying Katherine as the wife of Henry VIII (as opposed to the mother of Queen Mary I), it was almost certainly commissioned as part of a set of Henry’s six wives.» 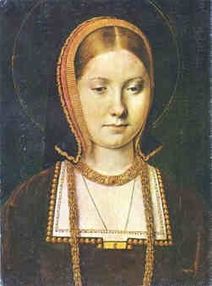 Possibly the collar of gold which

Katherine of Aragon brought out of Spain with her

and left to her daughter Mary 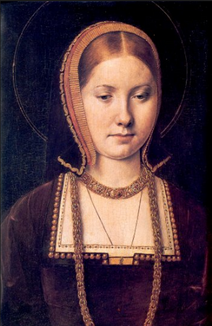 The recent reidentification of the portrait in the Kunsthistorisches Museum Vienna from Katherine of Aragon to Mary 'Rose' Tudor is in my view entirely erroneous.

Such arguments were made that the 'K' letter that is repeated throughout the necklace stood for 'Karolus' (the Latin spelling of the Charles. Mary 'Rose' Tudor was engaged to the Holy Roman Emperor Charles V for a time, and was in fact known as the Princess of Castile in her youth), not 'Katherine', but Katherine of Aragon spelled her name with a K in all of her known letters. Furthermore, she corresponded with her betrothed, Prince Arthur in Latin, their only common language, and Katherine is spelled with a K in Latin as surely as Karolus is.

Perhaps the main argument seemed to be that the lady is wearing a necklace of Tudor roses, so obviously she must be a Tudor rose.

I would instead like to make the argument that it was the portrait of Margaret of York, Duchess of Burgundy, the sister of Edward IV of England, that popularised this fashion. 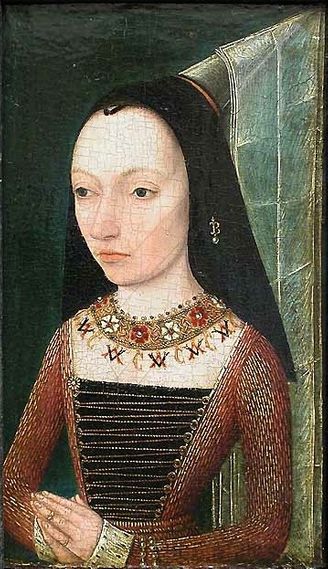 Margaret of York, Duchess of Burgundy 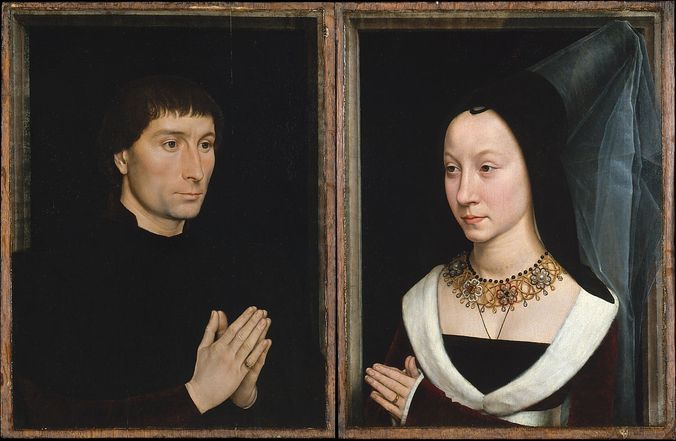 In this portrait in the Metropolitan Museum of Art, we see Maria Portinari wearing a similar necklace.

«The Patron: Tommaso di Folco Portinari (1428–1501) was a member of a prominent Florentine family who emigrated to Bruges to eventually become the branch manager of the Medici bank there. In about 1470, when he was about forty-two, he married Maria Maddelena Baroncelli (born Maria di Francesco Bandini Baroncelli in 1456), a mere fourteen-year-old from another leading Florentine family. They lived in elegant style in one of the grandest houses in Bruges, the Bladelinhof, which also served as Tommaso’s business offices beginning in 1466. Portinari was a strong supporter and patron of the reformed Observant branch of the Franciscan order, highly fashionable in Bruges at the time, which also received the court patronage of Margaret of York and Isabella of Portugal. In addition, he worshipped at the church of Saint James, located near the Prinsenhof and frequented by Dukes Philip the Good and Charles the Bold when they visited Bruges. Portinari was in fact a generous patron of Saint James’s church, particularly contributing to its rebuilding in the 1460s and 1470s. He was granted a funerary chapel there which he decorated lavishly. Tommaso was associated with the prestigious Confraternity of the Dry Tree, a cult promoted by the Franciscans that drew its membership from the elite society of Bruges—courtiers, foreign merchants, patrician families, and distinguished artists such as Petrus Christus and Gerard David. Portinari was a leading patron of the arts and commissioned important works from the most highly sought-after artists of his day. Among these works are Hans Memling’s Passion of Christ (Galleria Saubauda, Turin) and The Met’s Portinari portraits, as well as Hugo van der Goes’s Portinari Triptych (Galleria degli Uffizi, Florence) and perhaps a lost Crucifixion.[1]

Tommaso Portinari began working at the Bruges branch of the Medici bank in about 1440, when he was only about twelve years old. Advancing slowly, due to apparent opposition from Cosimo il Vecchio de’ Medici, Portinari did not become the branch manager and a full partner in the bank until 1465. Around the same time, Tommaso held an increasingly privileged position at court, participated in diplomatic affairs, and became a confidant of the future Duke Charles the Bold. By 1464 he was serving as the “faithful councilor” to Philip the Good, a position that he continued when Charles the Bold succeeded Philip at his death in 1467. During Portinari’s tenure at the Medici bank in Bruges, he made large and extremely risky unsecured loans to Duke Charles the Bold that were never fully repaid, eventually leading to the demise of the bank.[2] The Bruges branch closed in 1480, and in 1497 Tommaso and his wife returned to Florence where he died in 1501. Tommaso was buried in the church of Sant’Egidio, on the high altar of which was Hugo van der Goes’s Portinari Triptych. Sant’Egidio was part of the hospital of Santa Maria Nuova.[3]

The Commission: The portraits of Tommaso Portinari and Maria Baroncelli were most likely commissioned around the time of the couple’s wedding in 1470. Originally they formed a triptych with an image of the Virgin between them.

The portraits of Tommaso and Maria, of course, were intended as representations not solely of the couple’s piety; they also express their social status and connections at court. The couple are dressed in the height of fashion. Franke compares the appearance of the Portinaris with that of Charles the Bold and Isabella of Bourbon in two anonymous portraits (mid-sixteenth-century copies of fifteenth-century portraits, Museum voor Schone Kunsten, Ghent; fig. 3), noting that the couples not only resemble each other, but the costumes and haircuts of the men are quite similar, as are the necklaces, necklines, and hennins of the women. Just as the initials of Charles and Isabella decorate the latter's hennin, the initials of Maria and Tommaso were once visible on Maria’s hennin (as discussed below).[25] Maria in particular wears an ostentatious necklace very similar to one worn by Margaret of York, the third wife of Charles the Bold, at her wedding in 1468, which Tommaso and Maria attended (fig. 4).[26]»

And here we see a similar necklace on the bride of another Tudor prince, Anne of Cleves, in a miniature from 1539 now in the Victoria & Albert Museum. 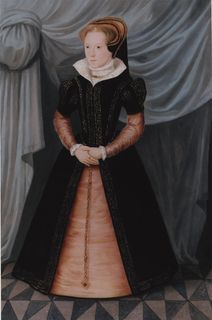 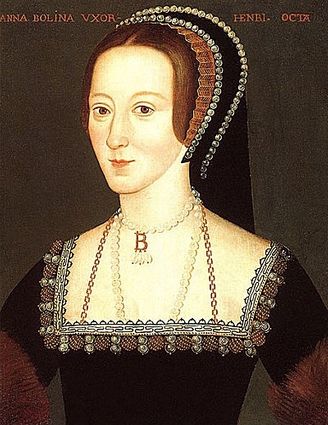 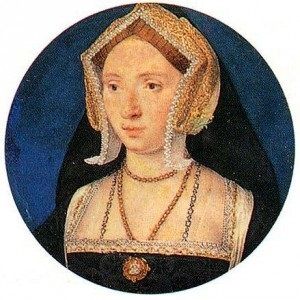 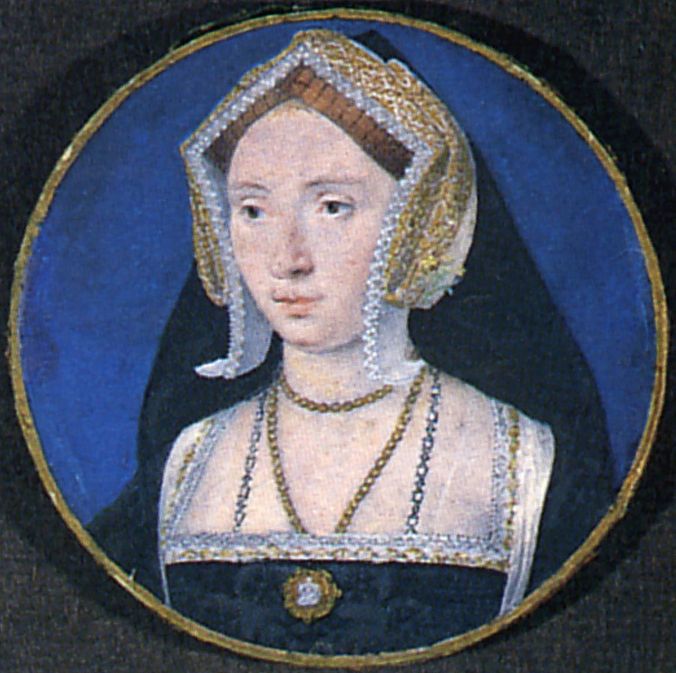 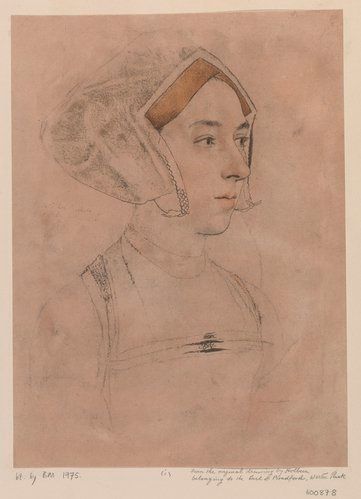 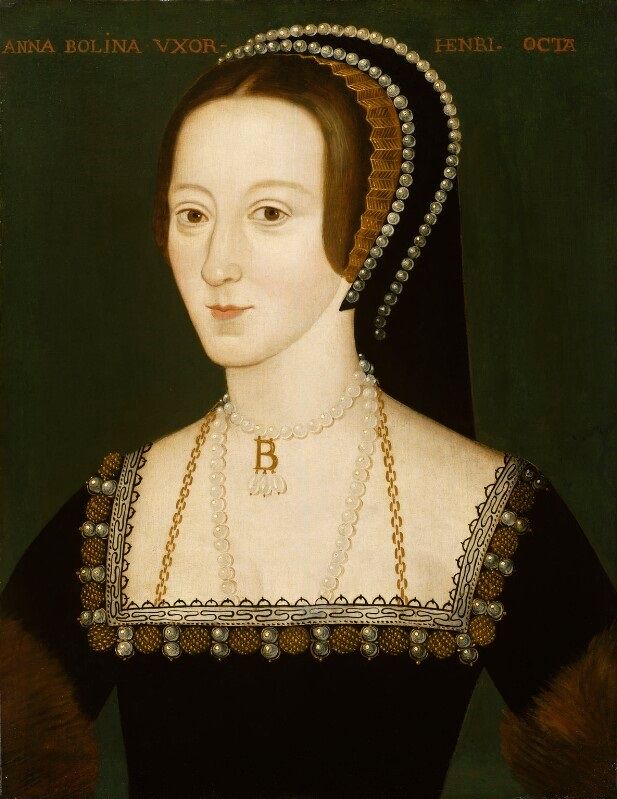 The Portrait of a Woman, Sometimes Identified as the Duchess of Suffolk, c.1560 is the same woman as ‘Unknown woman, wearing a cross’ in cloth of silver, nearly half way down your homepage. Thanks.

Cut a long-ish story short: i think it is FG. Thanks. 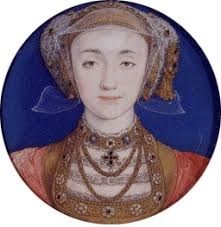