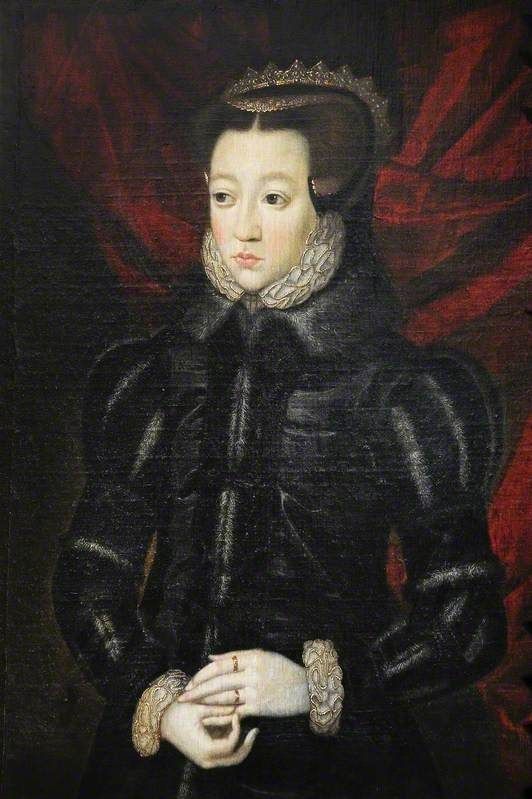 Called imaginary portrait, probably based on an earlier portrait.

Katherine Knyvett – A Who's Who of Tudor Women 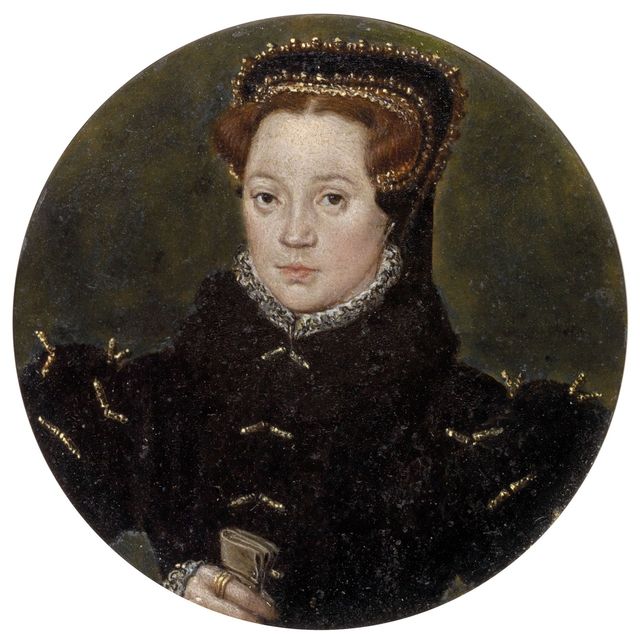 My immediate thought upon viewing this was that this was another portrait of Katherine Knyvett, Lady Paget-Cary. However, the sale was anonynous, making provenance and gathering supporting proof difficult. Until suddenly it occurred to me. What about the other items on sale from this collection? Might some clues be gathered there? Amongst many beautiful items there was only one other English painting – A Portrait of Lord Robert Manners-Sutton (1722-1762), half-length, in uniform. Lord Robert Manners-Sutton (1722-1762) was a direct descendant of Katherine Knyvett, Lady Paget-Cary.

Lee Porritt was the first to notice the similarity in painting style between the miniature of this lady and NPG 764. 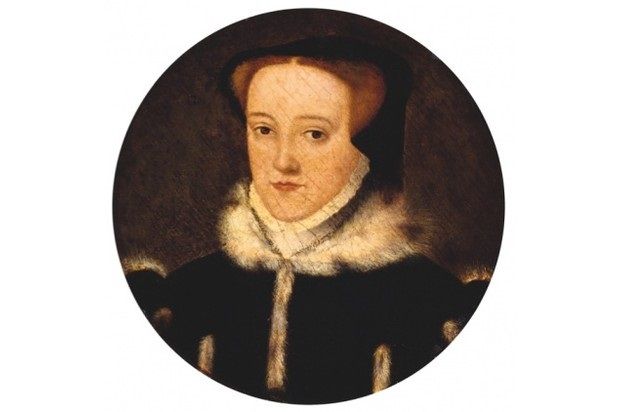 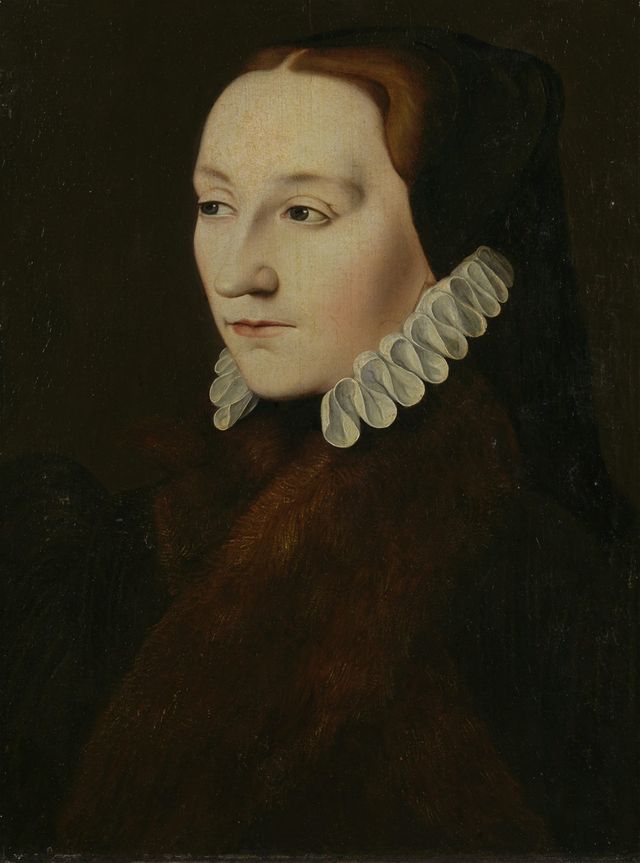 First recorded in the Royal Collection in 1871

Portrait of a Woman

sometimes identified as the Duchess of Suffolk 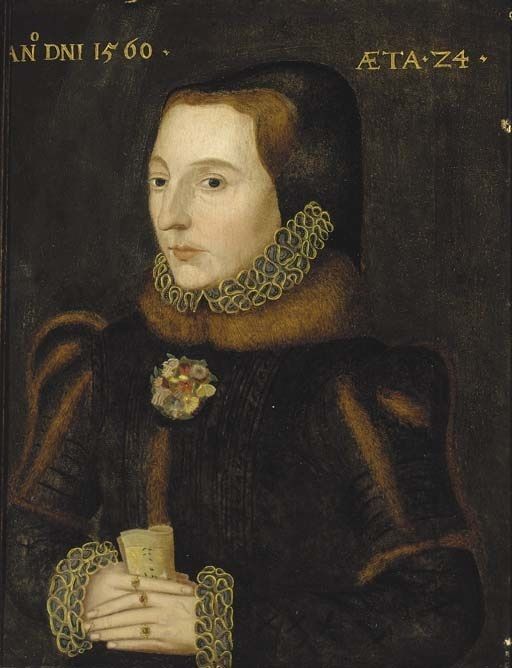 Portrait of a Lady by a follower of Hans Eworth, formerly in the Duke of Sutherland's collection. Another version is with the Egremonts at Petworth (see Collins Baker, 'Catalogue of the Petworth Collection of Pictures', 1920 and our For Referance page) 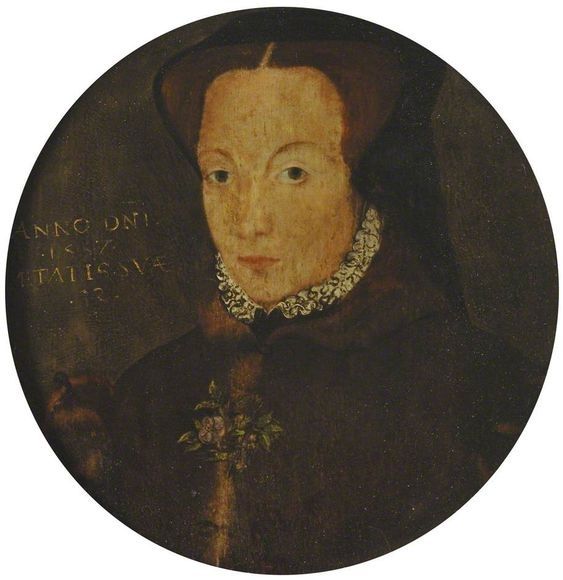 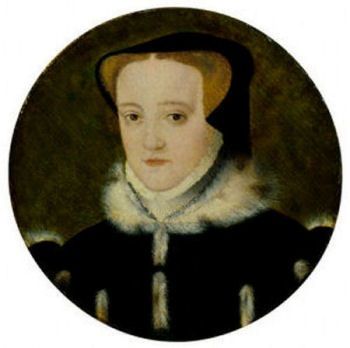 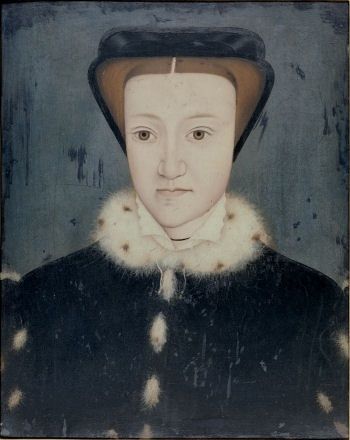 Gift to the Bodleian Libraries, University of Oxford, from Richard Rawlinson, 1751 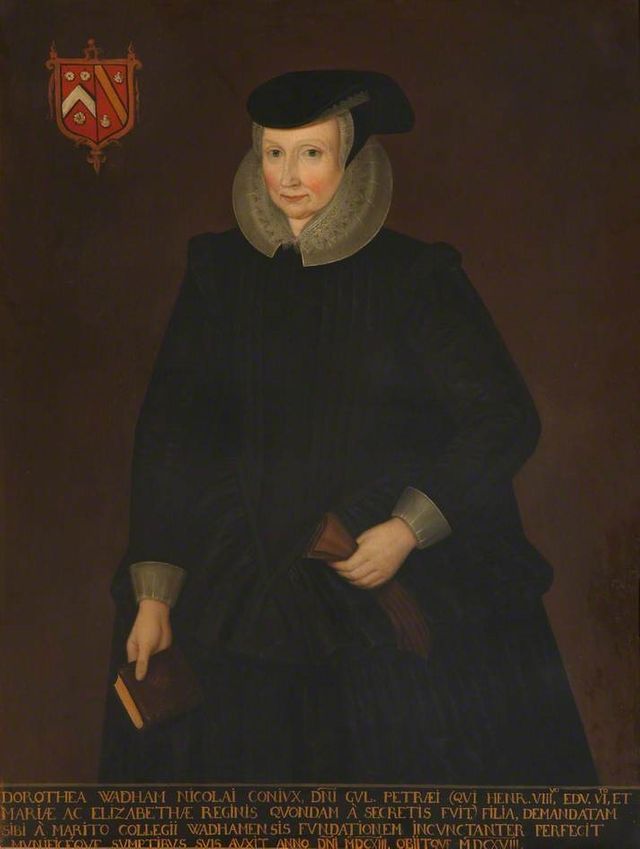 A link between the Egremont family at Petworth and George Sutherland-Leveson-Gower, 5th Duke of Sutherland (1888–1963) is the marriage of Sir William Leveson-Gower, 4th Baronet (c. 1647 – 22 December 1691) to Lady Jane Granville, the eldest daughter of John Granville, 1st Earl of Bath.

Their daughter Katherine (b. 1670) married Sir Edward Wyndham, 2nd Baronet,  and they are the direct ancestors of the Egremonts of Petworth.

She was born in 1535, had several already known portraits commissioned of herself, and her known portraits and her monumental brass bear a marked resemblance to this lady.

The couple had no children. He died childless, and all his estates and other wealth had been expected to pass to the children of his three sisters, Joan, Margaret and Florence Wadham. Florence Wadham (d. 1596) was the wife of Sir John Wyndham (d. 1572) of Orchard Wyndham, Watchet, in Somerset, and mother of Sir John Wyndham (1558–1645), ancestor of the Wyndham Earls of Egremont of Petworth House in Sussex.

Instead he determined to use much of his wealth to perpetuate his name. Wadham had been saving money to found a college at Oxford, yet his intentions had not been written down and his instructions on his death-bed were contradictory. Despite this, his wife Dorothy, adding much of her own paternal inheritance, attended to his wishes and, in her old age, oversaw the construction Wadham College, Oxford to its completion. The descendants of his sisters nevertheless still received large inheritances from Nicholas Wadham.

Dorothy Wadham has the distinction of being the first woman who was not a member of the Royal Family or titled aristocracy to found a college at Oxford or Cambridge.

That would explain the presence of her portrait miniature at Trinity College at Oxford.

Wadham College at the university of Oxford also has a Dorothy Wadham Building today, and the collection of Wadham College, Oxford is still today in possession of two identified portraits of her.

The Egremonts of Petworth are also still in possession of an identified portrait of her.

The 'Frances Brandon' portrait first recorded in the Royal Collection in 1871 might even have been purchased at the Stowe sale of 1848. Richard Temple-Nugent-Brydges-Chandos-Grenville, 2nd Duke of Buckingham and Chandos, whose personal bankruptcy occasioned the sale, was also a direct descendant of Florence Wadham and Sir John Wyndham, and his grandmother had a love for old family portraits.

The fact that the Sutherland-Leveson-Gowers were in possession of a portrait of her, might be the result of a misunderstanding. The portrait had probably already lost its identification, and the Sutherland-Leveson-Gowers may have thought that she was one of their shared ancestors with the Egremonts from the marriage of Sir William Leveson-Gower, 4th Baronet (c. 1647 – 22 December 1691) to Lady Jane Granville, the eldest daughter of John Granville, 1st Earl of Bath, whose children married their other respective ancestors. The portrait is clearly inscribed 1560 so it predates the lifetimes of these their known ancestors. It would have been an easy assumption to make that she was the ancestress of either Sir William or Lady Jane. Or it might have been a gift of some other kind or a result from some other connection to the Wadhams yet to be determined.

The only connection these portraits appear to have to Lady Jane Grey is that part of the Petre inheritance received by Dorothy came from grants made by Queen Mary to her father Sir William Petre, of lands formerly held by Lady Jane Grey and forfeited to the crown, which had come in part from the great heiress Cecily Bonville, of Shute, Devon, Lady Jane Grey's great-grandmother.

It is perhaps interesting George Greville, 2nd Earl of Warwick (1746–1816), who had a portrait of Lady Jane Grey in his Blue Boudoir where he kept his works by Holbein, was married to Henrietta Vernon, the daughter of Lady Evelyn Leveson-Gower who was the sister of Granville Leveson-Gower, 1st Marquess of Stafford (1721–1803), the direct ancestor of the 5th Duke of Sutherland.[1] George Greville, 2nd Earl of Warwick, was a noted potrait collector in his own right, however, and there is otherwise no reason to suppose that the painting of Lady Jane Grey that he owned was another portrait of Dorothy Wadham.

Interestingly, the Marquis of Bath, who were in possession of another portrait called Lady Jane Grey in the 1860s also shared direct ancestors with George Greville, 2nd Earl of Warwick and the Egremont-Wyndhams, going back to this period.[2] 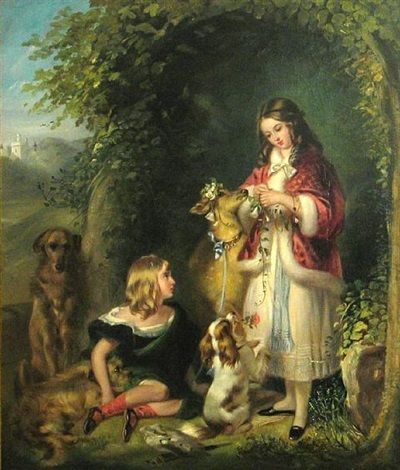 The Marquess of Stafford and the lady Evelyn Gower (The Sutherland Children) After Sir Edwin Henry Landseer (British, 1802–1873) 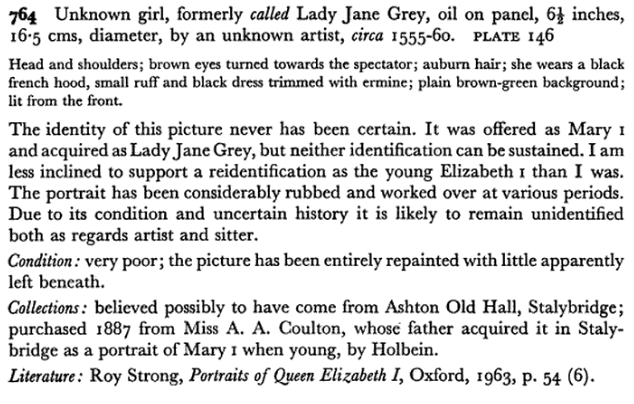 This is Roy Strong's assessment of NPG 764.

Miss A.A. Coulton was in all likelihood the Miss Amelia Ann Coulton who was baptised on the 11th of February 1838 at Warrington, Lancashire, England, the daughter of John Coulton, Division Officer Excise CS Branch Off Inland Revenue, and his wife Harriett.

She had two younger sisters, Sarah Jane Coulton, baptised on the 15th of May 1842, and Mary Jane Coulton, six months old at the census in 1851.

She died on the 8th of December 1890, only three short years after selling NPG 764 to the National Portrait Gallery in 1887.

Her wordly goods she left in the keeping of another man to whom I can find no relation:

Probate for the personal estate valued at £241 17s. 10d. of Amelia Ann Coulton formerly of 22 Whiley-street Rusholme Manchester in the County of Lancaster but late of 22 Bude-street Appledor in the County of Devon Spinster was granted on the 5th of January 1891 to Thomas Williamson of Mottram-road Stalybridge in the County of Chester Gentleman.

In what may be only an interesting coincidence, «The painter Robert Crozier of Manchester owned a bust-length portrait of Jane on wood panel that was recorded in the card file by Scharf in 1857, but it too has vanished.» (A Queen of a New Invention, by J. Stephan Edwards, p. 190)

«Robert Crozier (1815–1891) was an English portrait artist, based in Manchester. He was a president of the Manchester Academy of Fine Arts which he helped to found.

Robert Crozier was born on the 17th of October 1815 in Blackburn, Lancashire. His father was George Crozier, a saddler and botanist. After a childhood in Blackburn, Bolton and Warrington, he moved to Manchester in 1836, attending the Manchester School of Design from its opening in 1838, and became established as a portrait painter studying under William Bradley (1801–1857). He exhibited at the Royal Manchester Institution in 1841, and the Royal Academy in 1854.

After the success of an 1857 exhibition at the Langworthy Gallery, Peel Park, Salford, Crozier and other local artists established the Manchester Academy of Fine Arts in 1859. Crozier was elected literary secretary of the Academy in 1861, becoming treasurer in 1868, and president in 1878.»

It seems likely that their paths would have crossed at some point.

Robert Crozier died at his home at Sydney Street, Chorlton-on-Medlock, Manchester on the 7th of February 1891, only two months almost to the day after Miss A.A. Coulton.

The Robert Crozier Collection is held at University of Manchester Library.

He was an accomplished painter in his own right.

Any one of them could have done the overpainting noted by Strong. 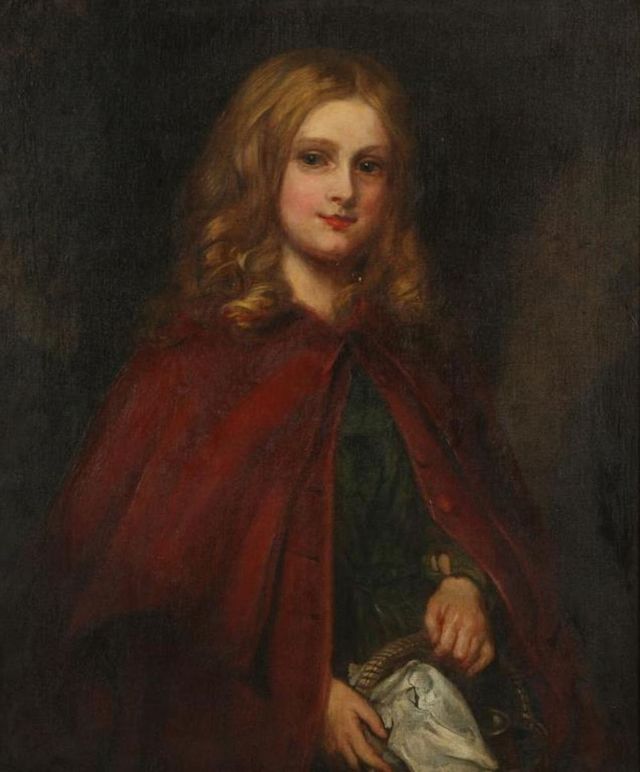 In a somewhat surprising twist, the theory that NPG764 and the portrait of Lady Jane Grey owned by Robert Crozier is one and the same, was proved by Lee Porritt at the Lady Jane Grey Revisited in the article The Crozier Portrait – Is It Lost?

In the blog post Lee Porritt included a picture of the portrait owned by Robert Crozier as sketched by Sir George Scharf, director of The National Portrait Gallery between 1857 to 1895: 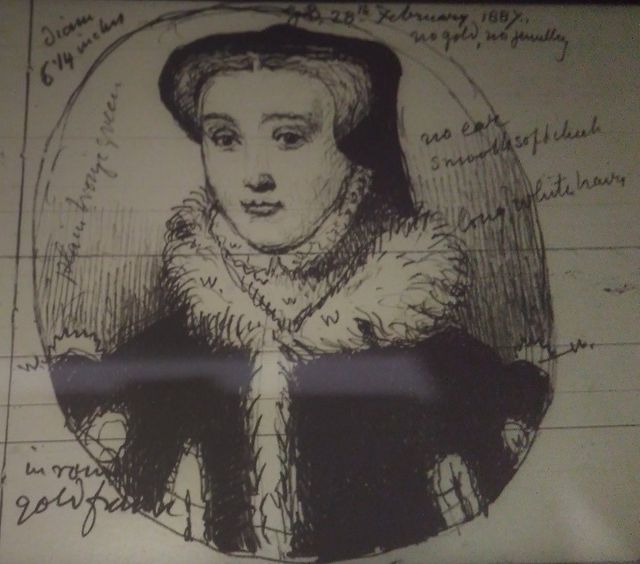 According to Lee Porritt, the «letters written to Amelia Coulton held in the registered packet for NPG764 list her address as 47 Sidney Street, Oxford Road, Manchester, the same address in which Robert Crozier is listed as living.»

Lee Porritt goes on to say that «Amelia Coulton actually lived at 22 Whitley Street, Manchester and it appears that she may have used Robert Crozier to sell the portrait on her behalf», a more innocent explanation than the one I have heavily implied that was the connection between them.

[1] «Finally, Harding listed a portrait of Jane Grey at Warwick Castle, home to at that time to George Greville, 2nd Earl of Warwick and a great collector of portraits in particular. According to mid-nineteenth-century inventories, the portrait hung in the Blue Boudoir, where the Warwick collection of paintings attributed to Holbein were gathered. Yet the portrait was not mentioned in a mid-nineteenth-century detailed guidebook to the house, though that guidebooklisted and described many dozens of portraits in virtually every part of the house. Significant sales of portraits from Warwick Castle were held in 1903, 1936 and 1968. The portrait is reportedly not at Warwick Castle today.» (J. Stephan Edwards, A Queen of a New Invention, p. 189)

George Greville, 2nd Earl of Warwick (1746 – 1816), who had a portrait of Lady Jane Grey in his Blue Boudoir where he kept his works by Holbein, was married to Henrietta Vernon

[2] «Several portraits noted in the NPG card file have disappeared from the collections that held them at the time they were first reported. A portrait recorded in the 1860s at Longleat, seat of the Marquis of Bath, was not included in a catalogue of portraits at that residence published less than twenty years later, for example. Neither was it uncovered during the Courtald Institute's survey of the pictures at Longleat in the middle of the twentieth century.» (J. Stephan Edwards, A Queen of a New Invention, p. 190)